Many Perfect-Privacy VPN User complain about a problem that seems to be inexplicable. The speed suddenly becomes inexplicably slow with the use of PP Manager. It is not easy to come to one of the most obvious things. However, many do not know how firewalls work on Windows PCs. I try in a short explanation here and describe how you the problem, which is actually the cause of the Kaspersky firewall function has to do to solve.

So Windows has a built-in firewall that "Standard Windows Firewall"This can be found in the Control Panel or simply type in" Firewall "somewhere. In case if you also have a Kaspersky Internet Security solution installed, the following happens:

Ok, I just wanted to describe it, but the real short form is:

If you use Windows with a Kaspersky Firewall feature, then you have two firewalls active. This is not good. You therefore have to decide, because this double game can also have security-related disadvantages.

I recommend to disable the Kaspersky Firewall at this point, both functions are related to it.

Instructions: Fix problems with duplicate firewall with Kaspersky and PP-Manager! 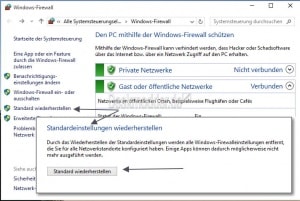 Now you will when you check the speed of the connections Perfect-Privacy VPN is already measuring a noticeable difference. And I have to emphasize that: Do not you have any security disadvantages to fear! The "standard Windows Firewall" and especially with the configuration by the PP-Manager is absolutely safe, even if it works much more unspectacular in the background!

1 thought on “speed problem with Perfect-Privacy VPN & Kaspersky - the solution! "