Surfshark VPN - Are you sure?

Two years surfing the Internet safely for less than 60 Euro? This deal is currently available at VPN-Providers Surfshark VPN required. And not only that: a lot of innovations have been launched since the company was founded in 2019. These concern all areas from available servers to speed, security and anonymity to operation and additional functions. But now the question arises whether the work was worth it and whether actual improvements can be seen. If Surfshark VPN a serious comrade on the VPNMarket is, the test shows.

Our conclusion too Surfshark VPN

In the sum power Surfshark VPN a round impression: the apps are currently among the simplest, most comprehensive and best of all VPN-Market. And that these attributes sound contradictory, but Surfshark can still combine these in one service.

The people of Surfshark obviously have their finger on the pulse of customers and delight with an inexpensive but promising service that seems ideal for many. We are still thrilled and recommend the Surfshark happy to continue.

Surfshark VPN in the test: mass instead of class?

When server offer has become Surfshark VPN Apparently focused on including as many countries as possible in the portfolio: The more than 1.700 currently active servers are spread over 63 countries (as of September 2020). If you want to run your Internet connection via the USA, there are more than 500 servers at over 20 different hosts available.

Has to network protocols Surfshark initially next to the standard openVPN (TCP and UDP) only the fast IPSec (IKEv2) is offered. Here, however, has been properly expanded, for example with Shadowsocks, SOCKS5 etc. In the test, it turns out Surfshark VPN also as an extremely secure service: Any loopholes (IP, WebRTC, DNS, Windows logon) are all closed. The service expressly allows file sharing via P2P or torrent, usage data is not collected in log files. It is also gratifying that there are no restrictions on the devices that can be used at the same time. That way you can Surfshark Easily share with family and friends.

Surfshark VPN offers three different tariffs: the monthly subscription costs 12,95 USD, the 12-month subscription costs 59,76 euros once (the equivalent of 4,99 euros / month) - with the additional 12 months available for free at the moment! 6 months cost a total of $ 38,94, that's $ 6,49. Payment works by credit card, instant transfer, Amazon Pay, crypto currencies such as Bitcoin and other payment options.

With Surfshark you can save a lot when shopping online!

Changing the IP address makes it seem like you are in a different country. A very good example of this is the subscription to YouTube “YouTube Premium”. This is sold in Europe for € 11,99 per month. The exactly identical subscription costs only € 2,40 in Russia. And of course you still use this subscription with German and have no restrictions whatsoever. The only difference is where you order this subscription. This is where it helps Surfshark while saving by being able to choose a convenient location:

Example: Save with Surfshark VPN (Video): 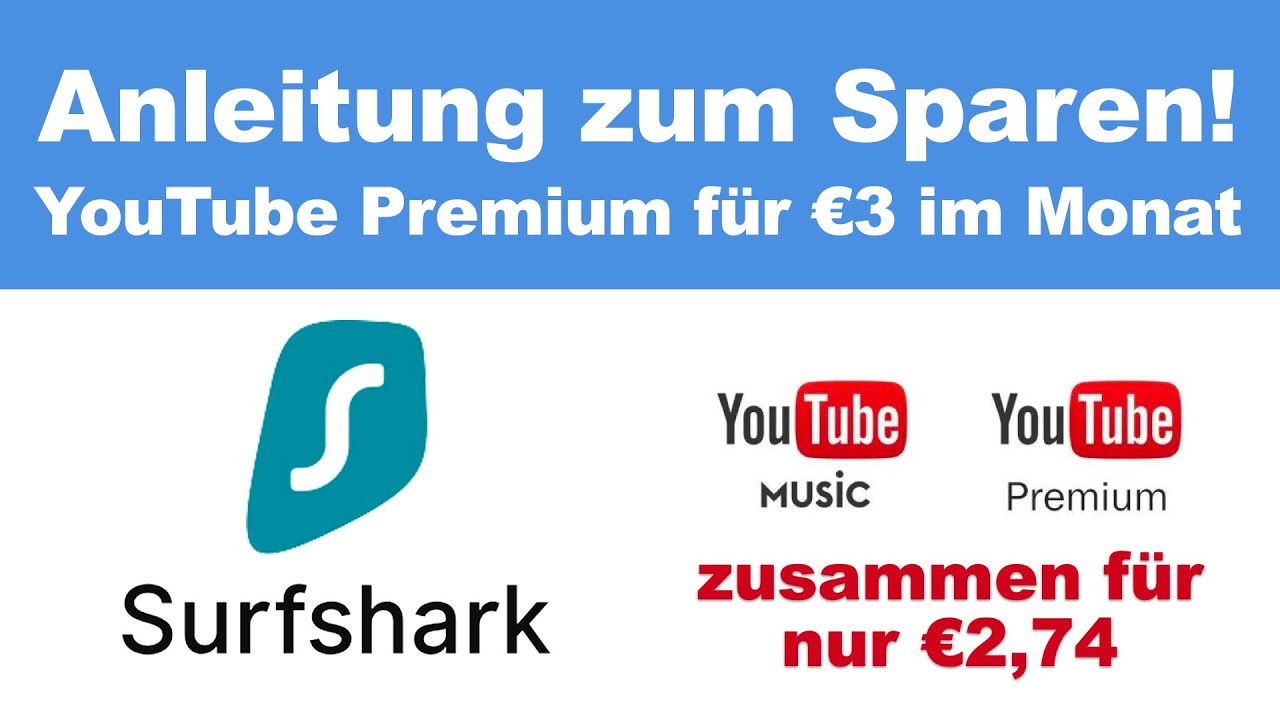 Surfshark Already a short time after launch, the majority of the devices had corresponding apps and software. In the meantime these have also outgrown their “infancy” and the apps are easy to use, highly usable and have excellent security functions. External devices can also easily be connected to the VPN There are no apps of their own, but understandable manuals.

Images of the macOS application 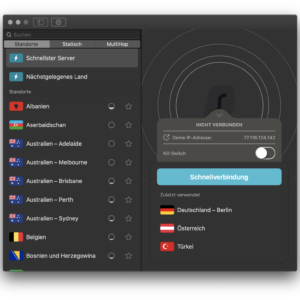 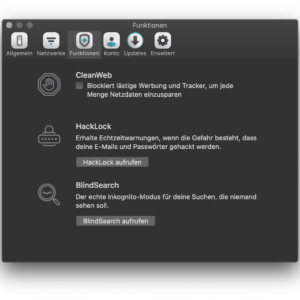 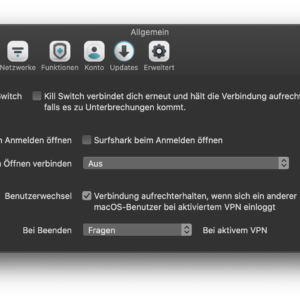 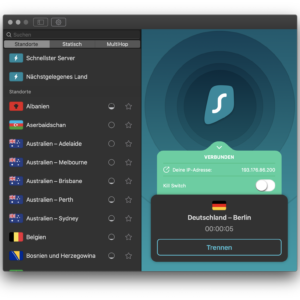 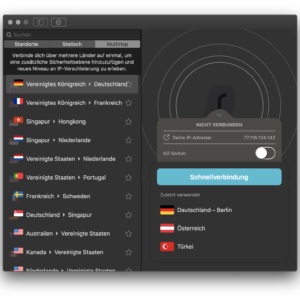 Corresponding software is also available for download for Windows and MacOS. The installation takes a few minutes, then you can start. Strange: If you run an IKEv2 on Windows systemsVPNConnection, the software will take a few minutes to connect to the Internet, depending on the PC and Ethernet settings. After that everything is stable. Under MacOS, this problem does not occur, but the protocol can not be changed and the whitelist function (see below) does not exist. Operation is easy with both systems, the menu structure is convincing with a good overview.

Surfshark VPN can also be used via the app with Android and iOS devices and is also highly recommended. Both applications can be operated perfectly, including logical and convenient menu navigation for mobile devices. Innovative Surfshark Functions such as CleanWeb or Whitelist are - in their entirety as with the desktop versions - also available here (although this was not the case at first).

Particularly noteworthy for the apps are the two following features:

With this new integrated function, Android users can protect their online activities from tracking. Because with GPS spoofing you can not only change the IP address, the GPS location of the device can also be manipulated. The function can be activated in the app settings and does not require any other provider, as is often the case with others VPNProvider is the case. As soon as you have activated GPS spoofing, apps that want to access your location data will only receive the coordinates of your chosen one VPN-Server. A great thing that ensures your privacy again and prevents your locations from being saved and misused for advertising purposes and even worse.

WireGuard is called DAS VPN- Protocol of the future cheered. The open source protocol, which is still in the development stage, impresses with its simplicity and extremely few characters in the code. On the one hand, this minimizes security vulnerabilities, and on the other hand, the speed compared to established protocols such as OpenVPN enormously increased. A clear case for Surfshark VPNwhich already has a reputation for being very innovative. Since autumn 2020 the provider has been offering its users WireGuard on Android, iOS, Windows and macOS apps. If you don't see the log in your app yet, just update it and it should work.

And yes, there is a solution for the well-known WireGuard security vulnerability: Because the protocol always assigns users a static, identical IP address. This is of course risky for privacy. That's why Surfshark a double NAT system installed, which ensures that you are with every VPN-Server connection receives a new, different IP address.

In the test offers Surfshark VPN in total good internet speeds: Especially with nearby VPNServer is the bandwidth slump in the Download irrelevant, since upload tempo suffers since rather. In the sample, the locations Germany (20 percent), Great Britain (43 percent) and France (55 percent) still delivered good speeds. The measured bandwidths are usually enough for surfing the Internet, Downloads and video streams in up to 4K UHD resolution. Class: As it is Surfshark VPN a relatively new one VPNService, the popular streaming provider Netflix and other platforms do not (yet) block many of the available servers.

Surfshark also rented virtual servers. Although this is cheaper for the provider, it certainly does not guarantee absolute anonymity for the user. Also, there are no DNS servers, cascades or other features for extra protection, whatever Surfshark does not necessarily make it the ideal partner for users who value high data security and top protection of their own identity. However has Surfshark introduced a new security upgrade - the RAM-only infrastructure:

Surfshark is one of the first providers on the market to run its server network without any hard drives. Without the usual hard drives, the infrastructure security is significantly increased. What is not stored on hard drives cannot be stolen in the event of an attack or passed on when information is requested. "A diskless server network effectively minimizes the security risks of the drive-based server infrastructure and guarantees our users the highest level of privacy," said the provider. And further: "... the focus on the privacy and security of the users has always been our top priority."

One of the main requirements for streaming met Surfshark VPN ever: It protects against warnings and persecution. But of course it is just as important with streaming that the various German portals do not block the service abroad. How does it look here? Mixed. Some services like Netflix work - which is a huge plus - but there have been problems with DAZN and Amazon Prime Video lately. But we hope that the provider keeps its promise and takes care of it. 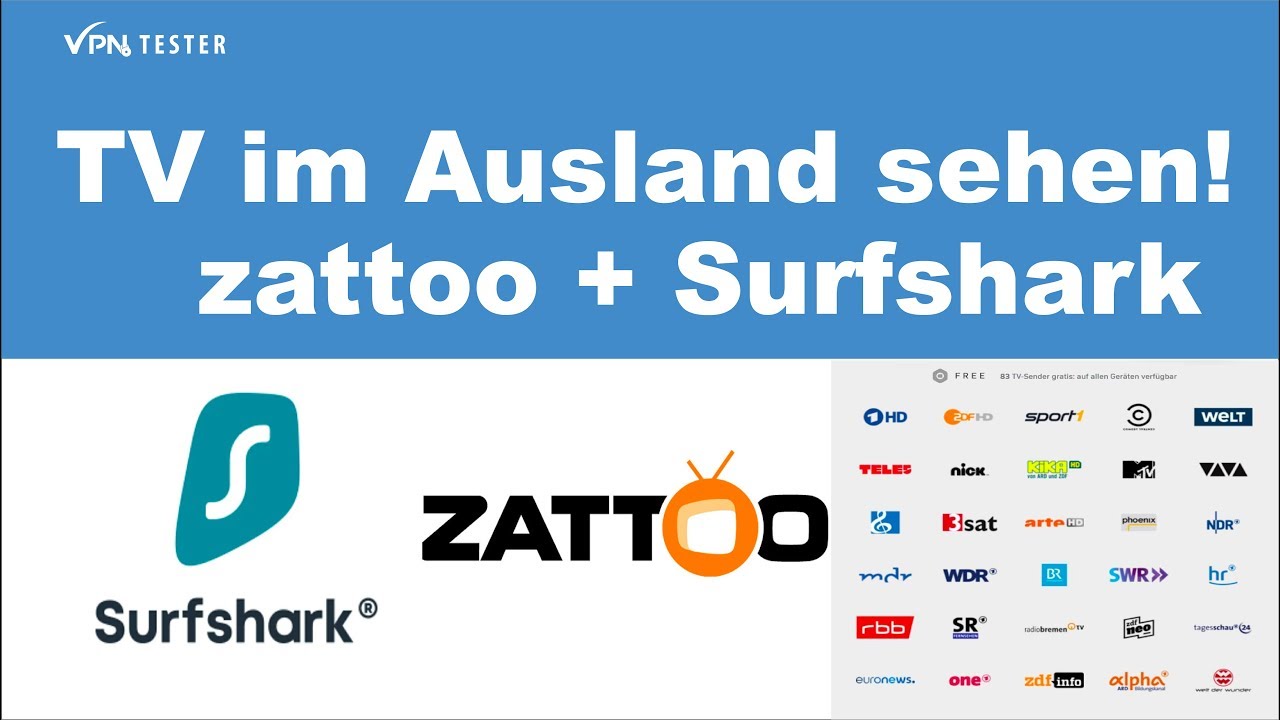 Can be used directly on the television

Anyone who owns an Android TV (such as Sony) or the streaming console hybrid Nvidia Shield or a streaming device from Amazon (Fire TV 4K, Fire TV Stick or Fire TV Stick 4K) may have a dedicated app of Surfshark VPN looking forward. Both app variants have the same structure and additionally offer the CleanWeb feature. Unfortunately, the functionality is disappointing: it is not possible to enable Netflix streams with VPNConnection to start. On Windows, MacOS, and on mobile devices, this works with the same servers. So degenerate the apps for Android TV and Fire TVs to the functionless storage eater.

For Torrent It is important to users that the providers also have KillSwitch and, above all, servers in the typical torrent countries. Offers both Surfshark VPN of course. In addition, cascades and other options are also available to prevent monitoring. In addition to the very good speeds for BitTorrent, we hardly have any defects with others Downloads can determine. The service is ideal for Downloads to be able to use for days. We still lack port forwarding, however Surfshark has promised to deliver this soon.

Surfshark VPN on the router

With shadowsocks and openVPN let yourself Surfshark on the common VPN-Client routers use directly. There are also some servers that are equipped with load balancing and can therefore be used without failures. Thanks to the good instructions, also in German, all users can find their way to VPN-Home router with Surfshark Sometime.

Instructions and configuration files for routers

The ping values ​​are good to very good depending on the chosen location, so there is actually no reason not to Surfshark participate in online games. In many cases this also helps to prevent known problems with double-nat of Internet providers such as 1und1 or Unitmedia. The gaming experience will be jerk-free.

The apps for the mobile devices are actually flagship applications, because they are easy and intuitive to use and, in addition, Shadowsocks on Android offer a way around them VPN-Block downright. This ensures safe usage behavior in foreign networks and also in hotels. It's a shame that DAZN or Amazon Prime Video cannot be used with it, but you can't have everything.

Features: more for your money

The functionality by Surfshark VPN is presentable:

Lately may itself SurfsharkUsers look forward to a helpful feature called MultiHop: these are so-called VPNCascades or VPNChains. The service filters the Internet connection via two servers at the same time, which makes surfing even safer. The disadvantage of cascades is the reduced bandwidth compared to the simple ones VPN.

Can you with Surfshark Stream Netflix abroad?

Yes, it works. Unfortunately, there are currently problems with DAZN and Amazon Prime Video.

Speichert Surfshark my activities on the internet?

No, Surfshark VPN does not save any log files.